The Three Types of Injunctions 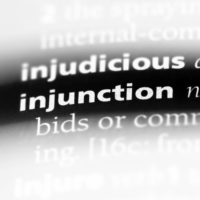 Injunctions are court-ordered legal tools used to stop an act or behavior, or they can be used to direct a person to take a particular action. One of the most common injunctions is used in domestic violence situations, also referred to as a restraining order. There are actually three main types of injunctions that can be used in many different legal situations, including domestic violence.

The least-used type of injunction is a preliminary injunction. These types of injunctions are typically used in lawsuits or trials where the final verdict is not determined, but a party in the lawsuit is required to act or not act until the verdict is reached. These injunctions are a precautionary measure, not used when imminent harm is involved, such as domestic violence cases.

By far the most common type of injunction, the temporary restraining order is used in many different situations, including domestic violence. Temporary injunctions are most commonly used to put an immediate stop to an action to prevent further harm or damage. In domestic violence cases in Florida, this is referred to as a Petition for Injunction Against Domestic Violence. It is a civil hearing and if a temporary injunction is entered by the courts, it can prohibit the defendant from having contact with the plaintiff and may result in the defendant losing their right to possess firearms or see their children.

Temporary injunctions or restraining orders usually only last for a set period of time. This can be 10 days, 6 months, or for whatever scope the court deems necessary.

The most severe type of injunction is a permanent injunction. These usually only are pursued after a preliminary or temporary injunction was put in place during a trial, hearing, or lawsuit. If a person is found guilty of a crime, such as domestic violence, battery or other assault, a permanent injunction for little or no contact could be issued to protect the victim.

An injunction can be pursued by anyone, whether or not there is evidence of a crime. In some cases, an injunction can be damaging to your permanent record, even if it was only temporary. In Petitions for Injunctions Against Domestic Violence in Florida, these injunctions are public record and cannot be expunged. If an injunction is entered, you may be required to relinquish any firearms and the injunction will show up on most background checks, even after they are expired.

If you are served with a petition for an injunction, you should take this matter seriously. It could impact your permanent record and your Second Amendment rights. Contact our team at Tison Law Group to discuss your case and learn more about your legal options.