The Emotional Effect of a Student Assault of a Teacher 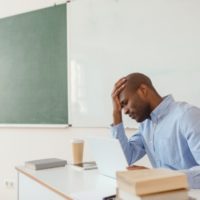 Teaching has always been a noble profession. Teachers were revered and respected because they were the key to a better life. In some societies, this is still the case. Education is greatly valued and those who bring education to the masses are greatly respected because of the work they do. Unfortunately, the assault of a teacher is too common in our society. Teachers have been punched, kicked, and killed at the hands of students.

Lack of Support for Teacher Safety

In recent years, there have been all types of assault on educators. Verbal abuse has been a long-standing form of assault of a teacher that has had to be managed. However, physical assaults are more prevalent. In one instance students of a Midwestern middle school used Facebook to invite other students to take part in “Attack a Teacher Day” at two middle schools. Nearly 20 students had accepted the invitation before the authorities were alerted by a parent.

Even though this incident happened a while ago, it is an indicator of the stresses and indignities teachers face. Current statistics show that too many of our teachers are being threatened by students. Educators face threats from students on a daily basis and some of those students make good on those threats. Other students may act impulsively, striking out at a teacher physically.

Insult is added to injury when teachers are assaulted and not given the support they request in the aftermath of the assault. Too often, offending students are put on suspension then returned to the classroom of the victimized educator. Education should not be a profession where one should fear for his or her safety.

Assault of a Teacher has Lasting Effects

Fearing for your safety is just one of the lasting effects assault can have on a teacher. Physical injury can result in permanent damage, which acts as a constant reminder of the incident. The assault of a teacher can cause post-traumatic stress syndrome, which also impacts the person’s life. Depression and its accompanying symptoms can lead to excessive absences, lost wages and a negative impact on family life.

The teaching profession is becoming less desirable even for those who feel “called” to the profession. Lack of funding for school supplies and books, lack of parent involvement, large classrooms, and lack of professional support are all negatives facing potential educators. With news reports of school shootings and teacher assaults, it is not surprising that people have second thoughts about going into the field of education.

The emotional toll caused by assault on a teacher has an effect first on that teacher and his or her family, which can be devastating; but it doesn’t end there. The classrooms, schools and education field itself are all impacted as assaults against teachers increase.

Personal injury caused by assault or accident can have a lasting effect on families as well as the victim. Tison Law Group handles personal injury cases with honesty and integrity. Our excellence is reflected in our reviews by former clients. If you have a personal injury case or require legal representation, please contact us for more information.