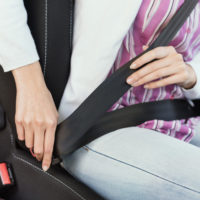 Often the first thing asked by an investigating officer at the site of a car accident with passenger fatalities is whether the victims utilized their safety restraints, or seat belts, at the time of the accident. Even though national campaigns have emphasized the importance of wearing seat beats for years, surprisingly many drivers and passengers still fail to regard the practice as completely necessary. This assumption is easily corroborated based on the number of injuries and non-restraint fatalities.

Every state in the United States except New Hampshire currently has a mandatory seat belt law in place. All these states require front seat occupants to buckle up, while 29 states require every single passenger in the car to do so. In 34 states, including Florida, police may stop vehicles they suspect have passengers who are not using restraints. All other states require officers to have another primary reason to stop a vehicle prior to checking for seatbelt compliance, but, outside of New Hampshire, they may still award a citation when the violation is discovered. Children’s vehicle restraints are required to some degree in every state, with varying age levels and height restrictions. For the most part, children from infancy up to adulthood will be covered by either child or adult restraint mandates.

Don’t Be a Statistic of Non-Restraint Fatalities

It’s clearly safer for your family to use their seat belts. Today’s restraints are more effective, less prone to fail, and more comfortable. Children’s restraints are more convenient than ever. From a safety standpoint, it makes no sense to risk non-restraint fatalities with your loved ones. From a legal standpoint, not using safety restraints in your vehicle could invite costly citations. Additionally, in the event of being in an accident, using seatbelts can protect you legally. Florida is one of 16 states that include the use of the “safety belt defense” to reduce the amount of damages awarded to plaintiffs who did not use restraints to avoid secondary injuries in an accident.

Don’t be a statistic. Make sure everyone in your vehicle is using their seatbelts properly, even for short trips. Set the example by using one yourself. Additionally, you will benefit by not incurring seatbelt violation citations during a traffic stop and you might avoid further culpability if another driver strikes your vehicle in an accident. If you are involved in an accident in which you or your passengers were not using safety restraints, give us a call at Tison Law Group for a consultation. We are here for you.