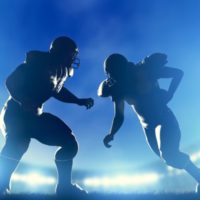 Head injuries relating to professional, college, and even youth sports are becoming an increasing national concern. It’s becoming more well-known that older players are suffering the long-term effects of previous college and professional sports career injuries. Among the most serious and most common injuries are head injuries.

The very nature of participation in physical sports includes the risk of blunt force head trauma, which includes a condition known as Traumatic Brain Injury, or TBI. Certain sports carry more of a concern than others. Sports that include a high number of physical collisions such as hockey, rugby and even soccer carry the risk of TBIs. Football is the most common sport that universities, players and their parents are concerned about regarding TBIs.

Football not only has a great deal of physical contact, but specifically involves the use of a player’s head to butt or lead a charge through other players. While helmets are designed to absorb and protect from impact, it can also become a blunt object moving at greater force than a player might commit to if not wearing a helmet.

By the time players are involved in college sports, they’ve likely had many previous head injuries. Studies from a 2014 Harvard and Boston University report say that only one in seven suspected concussions suffered by the Football Championship subdivision players they surveyed was reported. This implies that most college football players experience multiple or repeated TBIs over the course of their college careers, and this doesn’t include possible TBIs which may have occurred during their high school and earlier football program participation.

Types of TBIs and Their Consequences

Traumatic Brain Injuries are evaluated based on their severity and frequency of occurrence.  TBIs are defined by the Center for Disease Control as a head impact which creates a disruption of normal brain function. The levels of TBIs are:

If your college student is involved in sports and has experienced a head injury, or specifically a TBI of any level, your family may be eligible for compensation from the college. In Florida, the Florida Statute 768 describes the process of determining negligence. The case would have to be made that school staff acted in such a way to not protect the student, did knowingly put them in harm’s way or otherwise did not act according to the student’s well-being.

The school will have more resources than you, so don’t go in alone. Call Tison Law Group to make sure you have an experienced personal injury attorney at your side to see to it that your student’s best interests are preserved. Call us today.