E-Scooter Causing Head Injuries and Injuries to Others 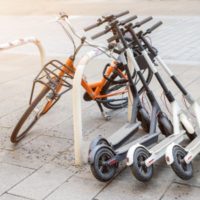 There is a new phenomenon catching on in cities across the country. E-scooters are becoming a popular sight as more people take to the small electronic vehicles to get around. While they may be cute and fun, they can also be dangerous and lead to serious injuries if not handled correctly.

Perhaps because they are scooters, people do not see the necessity of wearing helmets when they are using them. But, serious head injuries can occur when an accident occurs. A study conducted by the University of California revealed that one-third of e-scooter accidents result in injuries that require medical attention. Forty percent of them were head injuries.

Head trauma, along with fractures and dislocated joints, were the most common injuries. Head injuries were mainly minor concussions, but some of the patients who came to the emergency room had bleeding inside the brain. Even though the number of serious brain injuries was small in the study, for those few people, their lives may be forever changed.

Using helmets while on an e-scooter would help minimize any traumatic head injuries. The vehicles do not go that fast, 20-to-30 mph being their top speed. However, if you fall off one going at top speed, you could get seriously hurt.

Even though the vast majority of injuries in the California study were sustained by e-scooter riders, pedestrians made up eight percent of those reported hurt. Injuries were due to being hit by scooter riders or stumbling over a discarded scooter.

E-Scooter Use on the Rise

Florida is seeing a rise in the use of e-scooters. Tampa is preparing to accept e-scooters late in 2019. There will be approximately 2,000 of them allowed on the roadways, but some areas will limit the number of scooters allowed at any given time to a maximum of 300. A total of 600 will be allowed between East Columbus Drive and Martin Luther King Boulevard.

Safety is a main concern, both for e-scooter riders and pedestrians. There are concerns about scooters running into pedestrians on sidewalks and cars running into scooters on the road. Bicycles have designated lanes, but there are no specific lanes for e-scooters. Right now, Tampa e-scooter riders will be expected to stay on the sidewalks. Speed will be restricted to eight miles per hour. This may help avoid some accidents, but it won’t eliminate them.

As this new way of getting around becomes more popular in Tampa, it follows that there may be an increase in accidents. Tison Law Group of Tampa, FL, is experienced in personal injury law. We also have expertise in a variety of other legal areas. If you need experienced legal service, we invite you to contact us for a free consultation.