Does an Auto and a Side-by-Side Mix? 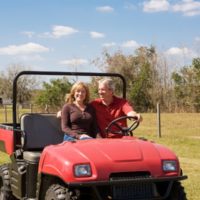 For many years now, smaller all-terrain vehicles with a steering wheel, four wheels and a low-lying cargo space in back have been used on farms. These hard-working vehicles could carry small loads of equipment or supplies to other parts of the farm property along fields and private dirt roads. They had a bench seat or two seats in the front, enabling up to two riders. This feature is the inspiration behind the general name for them of “side-by-side.”

These vehicles had limited power, only went up to 25 mph, and seemed relatively safe. Since those days, newer models have been developed for recreational purposes. The demand for something safer than ATVs (all-terrain vehicles using a handle bar for one rider) with the ability to accommodate one or more passengers arose. Manufacturers developed side-by-sides with higher load capacity, carrying up to four people, and able to drive faster, some up to 60 mph. Early models were top-heavy, so they required the addition of rollover protection systems on most models. Some of these vehicles now have hardtops and windshields. Some even have six wheels.

Side-by-sides are now referred to by several classifications. The most common term for them is Utility Terrain Vehicle or Utility Task Vehicles. Both are referred to as a UTV. With recent luxury recreational models, it can be hard to tell the difference between a street-legal automobile and a UTV. UTVs are typically slow-moving cargo movers on private property. UTVs that drive over 30 mph are considered ROVs, or Recreational Off-Highway Vehicles.  Florida statutes in 2018 do not allow UTVs or ROVs to be operated on public roadways. The exception for ROVs to operate on public roadways or public beaches and land allows for police officers to do so as part of their enforcement duties.

Simply due to side-by-sides not being street legal in Florida, there should be no issue between mixing these two types of vehicles. Of course, this is not always followed in practice. Legal automobiles will often go “off-road” and many ROV operators attempt to drive on public roadways. Due to the lack of required road safety features such as windshields, turn signals, and driver’s licenses for minors, a side-by-side is incompatible with public roadway safety.

They also cannot keep up in speed on highways. Legal automobiles can be generally larger and would likely win in a collision with an ROV. In any case, it’s generally assumed that mixing the two types of vehicles is not safe or recommended. If you or your loved one has been injured in an accident involving a side-by side and automobile, you may be due compensation. Contact us at Tison Law Group to understand your options.