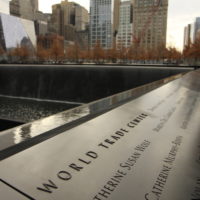 It is difficult to believe that on 9-11-18, it will have been 17 years since the horrific events that occurred at the Twin Towers at the World Trade Center, at the Pentagon and in a field in Pennsylvania. Regardless of political views and changes in the world since that time, 9-11 is a day that all Americans should come together to remember and honor the fallen from that tragic day.

Most people who can remember 9-11 know exactly where they were when they first learned about the terror attacks that would take almost 3,000 lives. Many witnessed the attacks firsthand, others watched in disbelief on television or heard about them over their car radio. The events that day stunned the nation and brought forth a patriotism that united the country in sadness and loss. Now, 17 years later, it is important to remember the victims and those who sacrificed their lives on that tragic day.

What occurred on 9-11 needs to be remembered. As painful as it was for those who had friends and family who were lost, or just experienced the fear and helplessness that millions of Americans felt, this day needs to be remembered. The anniversary is a reminder that the freedom America has cannot be taken for granted. It is also a time to pay tribute to those who served that day and in the years since to protect those who live in our country.

It is crucial to remember the loss of those who died in the planes and buildings on 9-11 and the devastation to their families. Honor, too, the many first-responders who saved so many, and those who sacrificed their lives to help their fellow Americans. Remember, as well, the firefighters, police officers and countless volunteers who worked tirelessly at Ground Zero that day and for days and weeks to come. It is also important to honor the troops who have fought to prevent further attacks on America over the last seventeen years.

How you choose to remember and honor the fallen on 9-11 is not important. A moment of silence, doing a good deed, or visiting Ground Zero – each has value when it is done in remembrance and tribute. The key as Americans is not to take their sacrifice for granted and to honor this important day in history.

At Tison Law Group, we stand with our fellow Americans to honor the fallen from 9-11. We recognize the brave men and women who were lost and the many who have served to protect our country since that tragic day.